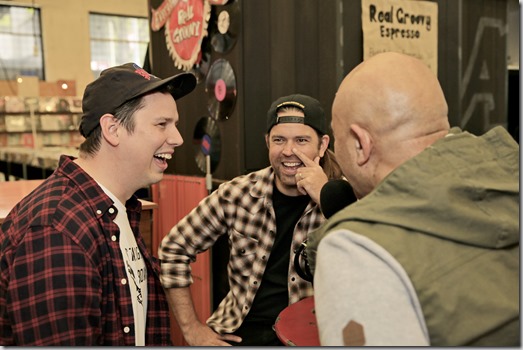 Queensland rockers Violent Soho are not your typical band. The young quartet are on their way to play Laneway Festival next year in Auckland but not without first playing a one-off gig at Auckland’s iconic Kings Arms Tavern. Sporting a sound reminiscent of Offspring meets Pearl Jam with the punk/thrash phrasing of Sepultura – they’re a real musical hotchpotch with a surprisingly mature sound that belies their youthful appearance

Formed in 2004 in the Brisbane suburb of Mansfield, Queensland (the band still use their postcode 4122 in merchandise and band images) the band consists of Luke Boerdam on guitar/vocals, James Tidswell on guitar/vocals, Luke Henery on bass and Michael Richards on drums. Well according to Wikipedia anyway and furthermore, ‘James and Luke commented that they do not party as hard as friends DZ Deathray and that when they play a show, they go back to the hotel and watch tv and go to bed around midnight’ – it’s like ‘who wrote that, what?’ says Luke surprised at their Wikipedia write-up

With the recent Trans-Tasman Rugby World Cup final behind us, hailing from Brisbane, it’s no surprise the guys hardly register interest in the All Blacks win as singer Luke admits he knows ‘sh*t all about it’ . “I just don’t care” laughs Luke. “I’m just being honest” (laughs). “Rugby union isn’t as popular in Queensland” chips in James. “Maybe it is with the private school boys – rugby league’s a little more our game I guess” 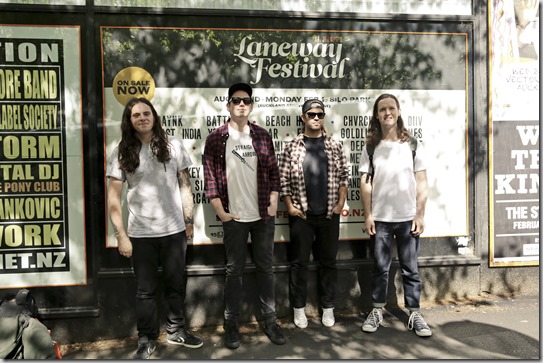 Their sound has often been likened to the alternative rock music of the 1990s, with bands such as The Pixies, Mudhoney and Nirvana cited. The band’s third studio album, Hungry Ghost, was certified Gold in Australia last year. James even seems smug proud of his stint living here as youngster in an East Auckland suburb. “I was born in Sydney but I did live here from 1 -6 years old, Buckland’s Beach or around Pakuranga there, I went to Pigeon Mountain State School or Primary. I’ve got a lot of family from around Auckland coming tonight”

Talk deviates around the history of the band, starting out when as plucky teens while still at school progressing to signing an “overwhelmingly exciting” deal with Ecstatic Peace! Records, a record company headed by Sonic Youth‘s Thurston Moore, a hero of the band. And then there was the incident last year reported in the news both here and Australia, when James was nearly booted off a Virgin Airlines plane for wearing a tee with ‘Eat, Sh*t, Die and was considered a ‘terrorist threat’ because of what was written on his t-shirt

“My memory of the whole thing is playing pool halls & garage parties” cites Luke. “Where you just rock up on the floor just bring your DS-1 pedals and play – we just wanted to fit in. There were all these cool bands like Eat Laser Scumbag and The Sips, they were the bands we started playing with every week. I don’t know there’s no quote from a book or anything, we just squished these two words together, Violent Soho – we were like ‘oh that’s good enough’. We didn’t realise we’d still be in the band 10 years later. I actually thought that within 10 years I’d be a doctor”

“Do you know the band The Mint Chicks?” says Luke. “When we were first starting out, we went to see them the whole band in this tiny little place that fitted 50 people we were desperate to play this place, we’d been trying three years. Anyway The Mint Chicks were playing on this Wednesday night and they totally destroyed this place – destroyed it”

“The lead singer was climbing on the top part of the bar, it was hectic and from then on we literally went home and decided we wanted to put on a live show like that – So we’ve continued to do our best to put on a live energetic show as that which is incredibly hard because that’s one show, but what we expect from New Zealand is obviously everyone to act that same way. Because that’s how your bands are acting in our country so we just presume that’s normal”

Laneway is looming on the horizon for these Queensland rockers, it’s just another chapter to their existence and after witnessing their recent energetic power surging gig, I predict good things for the band and a bigger audience next time they come back in February. “I just hope people get into it and tear the place apart really” says Luke. “Either way we’re going to rock out and play. If there’s only two people there, we hope people get into it, get into the whole mood of things – That’s how we like to get things done”

Let’s hope New Zealand customs aren’t too offended with the bands’ tee shirt attire or lyrics.  Be a sad day if that ever happened