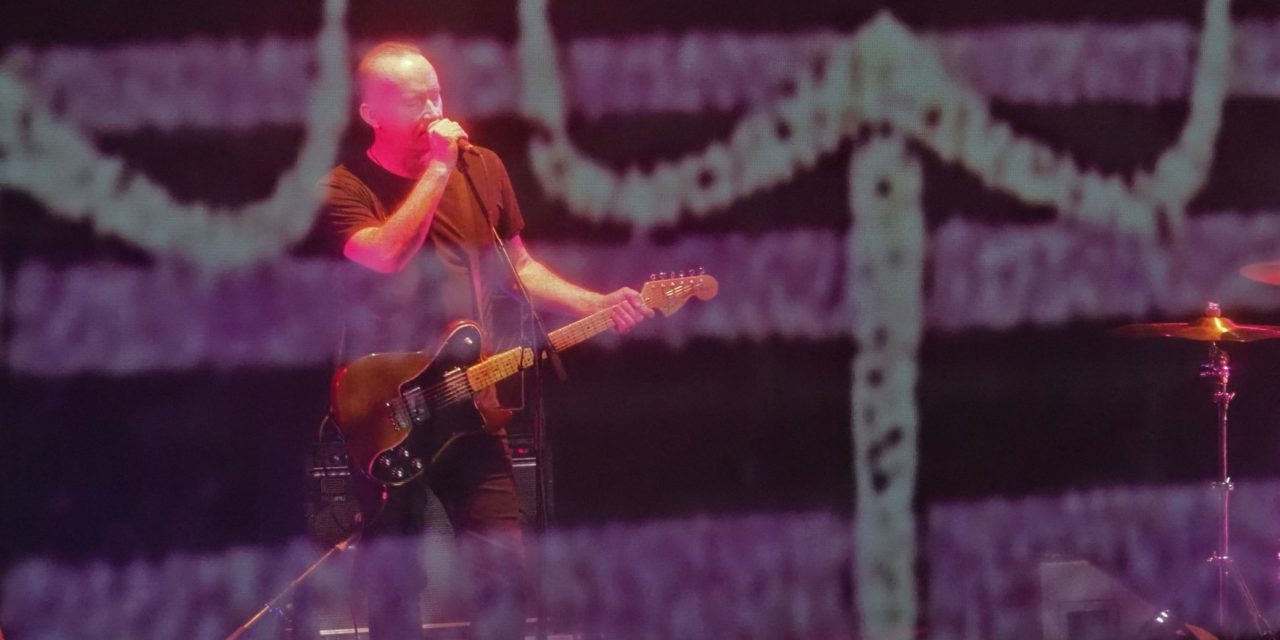 It was a night like no other. Literally, as Auckland was revelling in Post-Covid Level One status, it opened the gig scene wide open. Not even the impending preamble to this years General Election was going to dismiss the smile off those in attendance – it was a truly beautiful sight.

Equally as beautiful was the bold media show synced together with the musical force majeure of Auckland band Gramsci. Under the gaze of mainstay founder Paul McLaney, Gramsci, his kind of personal sobriquet, weaved his sonic genius to the audience, “Thank you, you’re so polite.” And they were too.

The exclamation of one punter shouting “Eruption”, a reference to Van Halen’s Eddie’s passing or the short intermittent bursts between songs from McLaney, had the crowd engaged from start to finish, as they meandered their way through their latest album Inheritance for it’s world premiere.

Armed with his formidable minstrels, stalwarts Jol Mulholland (guitar) and drummer Greg Havers, breathed to life the first songs penned in over fifteen years. Each track given it’s personal AV slide show, the thin veil of gauze reflecting the video content thrown up and overlaying the band. This effective visual sleight of hand gave the show an extra dimension, enhancing the show goer’s experience ten fold.

Alternative Pop tracks Atlas and the Pop smooth of Ancient History were just two highlights of the night, where this ethereal visual and sonic assault worked very well. It’s a show quite unlike anything your sensory perceptions have experienced, whilst McLaney waxed lyrical about the privilege of “congregating” in these Covid times, it was a somber reminder that not all was well with the world.

At times, I imagined Mark Hollis from English Post Punk band Talk Talk, as McLaney was singing. The influence of the 80s reminiscent in the guitar riffing and pentatonic soloing, the ambient acoustic setting as McLaney dumbed down the mood , was powerful in simplicity. Here we heard the muse behind the music, captivating.

As the boys joined him back on stage to close out the set, my mind was already out on this one. Go see this show, it’s a chance to hear one of this country’s most underrated singer/songwriters, plus, a chance to hear one of best new albums these ears have graced in a long time. Vote ‘two ticks’ Gramsci, you’ll see them back before the next three years, I’m sure of that.