Much Ado About Nothing – Pop Up Globe Review 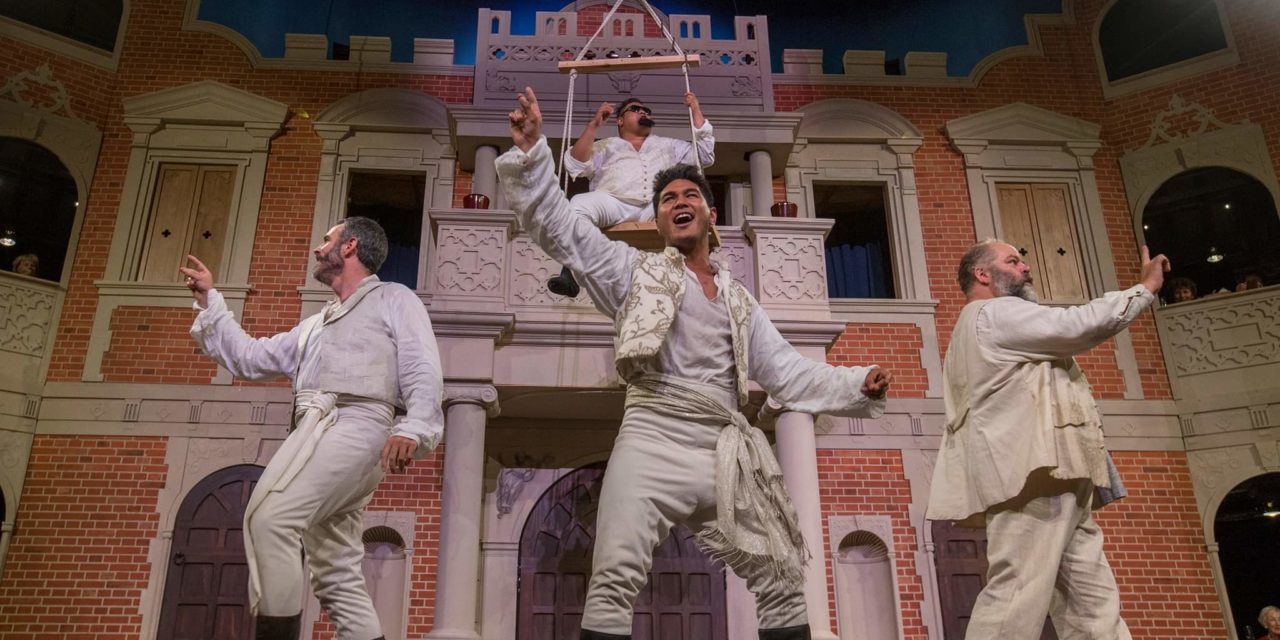 Throughout its several seasons in action, The Pop-Up Globe has provided innovative productions at a very unique venue that is really something to be experienced if you’re an appreciator of live theatre. High standards, updating/mashing up & re-contextualising classic plays, & pushing the boundaries of theatre have always been the philosophy of Pop-Up productions.

With this summer’s Shakespeare retrospective (which also includes Romeo & Juliet) Much Ado About Nothing is given the rom-com treatment, while sticking with the ethos to stretch conventions, but upping the anti even more so. Players are given a platform to stretch, while challenged to be alert for improvisational moments, as well as substantial physical acting demands. Writing in the venue itself as a character, several actors find themselves roaming the teared catacombs interacting with the audience, climbing and abseiling down the structures scaffolding. Just how they got this one past OCH is anyone’s guess.

Transposed to the holiday stopover of the South Pacific, Much Ado About Nothing adheres in part to Shakespeare’s original text, while meshing modern cultural themes and ideas. The play stocks plenty of Kiwi & PI humour and references. Very much a match-making/who will wed who tale, this version will have you rooting for any potential hookup hinted at throughout the two part show.

The cast and musicians are drawn from a troupe known as The Northumberland Theatre Company, a group conjoined with the venue. There’s a great display of talent in the mix here; Jess Hong & Theo David play the central couple to be, while James Maeva & Renee Lyons embellish the courting antics which seemingly appear to transpire across the board. Veterans Greg Johnson & Stephen Lovatt add their experience with great aplomb.

The Pop-Up Globe in summer gives you the opportunity to make a night of it; an enclosed garden bar, food/beverages available pre-show, and a chance to mingle with the cast too if that’s your bag. The venue itself is one you’ll want to investigate, its open-roofed design and standing room floor give it very much a street performance setting. Finding your seats inside the myriad levels of the Globe is an adventure in itself, ushers are on hand if you lose your way.

Sadly, this is the season finale of the Pop-Up Theatre in its posited location of the Ellerslie Showgrounds in Greenlane. The show & transportable venue goes on the next road after summer, around the country & abroad. Make it a priority to catch Much Ado About Nothing this summer, where else are you gonna find the unlikely mix of Shakespeare & Cook Island log drumming?

Dirt and Other Delicious Ingredients “humorous “