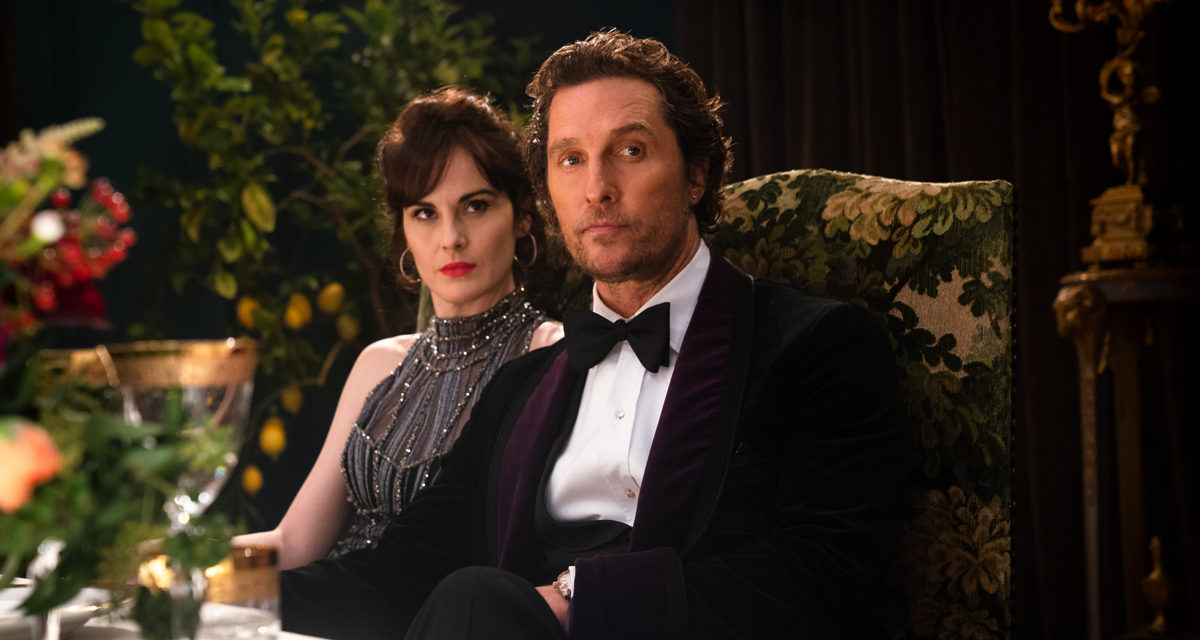 “If seriously high levels of profanities and realistic blood splatters are not your thing, then this may not be the right choice for the weekly date night”

After more than a few years of dabbling in mainstream film endeavours such as Sherlock Holmes and the questionable Aladdin, Guy Ritchie has finally returned to his crime comedy roots with his latest offering The Gentlemen.
Fans of his similar earlier creations such as Lock, Stock and Two Smoking Barrels, the brilliant Snatch and RocknRolla will undoubtedly enjoy Ritchie’s new project which follows a similar recipe, updated for the 2020’s. Once again as he did in Snatch twenty years ago, Ritchie chooses to mix the waters, his star-studded cast including both American and English actors.

Wisely however, he casts one of his biggest names – Matthew McConaughey – in the role of Mickey Pearson, an American schooled and now living and running his lucrative marijuana empire in the UK; Brad Pitt may have been able to pull off the ‘pikey’ accent – to great effect – in Snatch, but with that distinctive Texan drawl, casting McConaughey as anything but an American could have derailed the film before it had even started.

Employing his usual nonlinear narrative, The Gentlemen takes a good twenty minutes to get its feet under the table, pour a cup of tea and weave its story, but once it gets going it offers up a good range of interesting characters and a plotline that sees a profitable Pearson crave retirement, but only if the price is right and only if he leaves with his gangsta reputation intact.

Cue sub-plots that involve everything from bribery to blackmail to personal bodyguards packing machine guns, and of course a questionable Irishman with a penchant for using farm animals to get what he wants (fans of the science fiction television series Black Mirror might spot the similarities) and wearing plaid shell suits; Colin Farrell seeming so naturally made for the role that you do have to wonder if he just wandered onto the set and started playing himself.

While the cast includes such actors as Henry Golding as Dry Eye, Jeremy Strong as the conniving Matthew Berger, desperate to get his hands on Pearson’s empire no matter what it takes, and the fantastic Michelle Dockery as the completely unflappable Rosalind Pearson, wife and Queen of the aforementioned Mickey, it is none other than Hugh Grant that is the keystone.

A journalist of questionable integrity Fletcher (Grant) has been squirreling away information like nuts for winter in the hopes of blackmailing Pearson and retiring to some tropical island for the rest of his miserable days. Not stupid enough to approach Pearson directly, he instead shows up on the doorstep of Raymond (Charlie Hunnam), Pearson’s personal shadow, who while despite being always impeccably dressed is not at all averse to using force in the form of a bullet to the back of the head if so required.

Despite the overall impressive casting, it is Hunnam and Grant that really make the film, those used to seeing Grant in his usual sappy roles in numerous rom-coms in for a pleasant surprise as his lecherous persona and humorous story-telling peppered with all the slang fans of Guy Ritchie’s have come to expect, intertwines itself throughout the plot. Balancing it all out, the cool, calm and ever calculating character of Raymond, sees a nice departure for Hunnam from his role as Jax in Sons of Anarchy.

“Despite the overall impressive casting, it is Hunnam and Grant that really make the film”

Needless to say, this is a Guy Ritchie movie, so if seriously high levels of profanities and realistic blood splatters are not your thing, then this may not be the right choice for the weekly date night.
But make no mistake about it, Ritchie is back.