Take a script, a script that is made up of quotes that have been meticulously noted down verbatim from numerous Auckland University lectures over a period of seven years. Now place that script into the hands of one very talented actress and watch the magic unfurl before your eyes.

I Didn’t Invite You Here to Lecture Me written by Amy Mansfield, is one beautifully stitched together piece of language. Deftly shifting between nouns and adjectives, music and religion, cultural exploration and the definitions of law and equity, it will both amuse and inspire. It may just also, trigger some of that anxiety brought about by maddening lectures where nothing made sense and the ever-impending doom of exam week…

“Intelligently written and brilliantly executed, nowhere else will you see Shakespeare sidle up against policy and education”

Directed by Nick Dunbar, the stage is set with a simple lectern, keyboard and screen upon which periodic powerpoint slides will guide the audience into moments of hilarity, this, before presenting subject matter that will make you seriously consider, just how language can be fashioned into a weapon. A weapon that all too often is used to abuse, dismiss and belittle those of opposing race, religion and sex, to the one who wields the language. Just why are there numerous terms to describe a woman of questionable moral values and yet only one to describe a man?

Featuring Mika Austin who performs as an astounding eight different lecturers, audiences will be enthralled by her ability to seamlessly interchange between them all aided by little more than two pairs of glasses. Employing the use of differing vocal styles for each character, Austin gives us not only a German and an Irish accent but a comedic monotone for one of the lecturers that will remind all of at least one particular teacher in their lives, the kind that could put a rock to sleep without even trying.

Austin also cleverly employs the use of posture to differentiate between her characters, her astounding memory and perfect synchronisation between voice, body and character throughout the entire sixty-minute play something that is an absolute joy to watch and a skillset not often seen. With some ‘low-pressure’ audience participation thrown into the mix, attendees will indeed feel like they are back in the lecture hall, Austin leading from the front.

“Attendees will indeed feel like they are back in the lecture hall, Austin leading from the front”

Intelligently written and brilliantly executed, nowhere else will you see Shakespeare sidle up against policy and education, similarly German, Law and Anglo-Irish literature battle it out over the topics of Sex, Music and Linguistics, while attempting to educate one and all over the most effective placement of the tongue.

Yes, I Didn’t Invite You Here to Lecture Me is overflowing with extra credits and is a lesson that you really cannot afford to miss.

Get your tickets now, to see what the fuss is all about. The show is playing next week at Melbourne Fringe Festival at the Universal Restaurant Carlton, Melbourne Sept 19th to Sept 22nd. Buy tickets here:

I Didn’t Invite You Here to Lecture Me 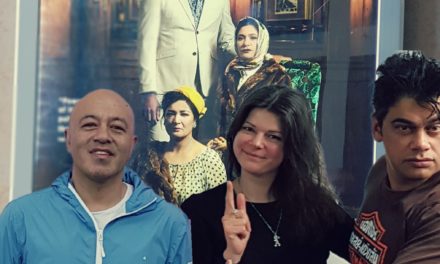