So close to the heart was the films subject matter “P” or methamphetamine it reportedly moved Paul Holmes to tears after the first reading. The Last Saint is ex-Shortland St’s Naufahu’s foray into writing and directing his first feature film, yielding a credible and solid first outing.

The Last Saint delves into the Polynesian criminal world witnessed through the eyes of a mixed Polynesian teen Minka played by actor Beulah Koale (Shortland St, Fantail). Minka lives with his drug addicted mother Lia  (The brilliant Joy Vaele) and is reunited with his Maori father, local gangster Joe (Calvin Tuteao) who affectionately refers to Minka as the “last Saint”. Minka’s hopes of the family getting back together are short dashed, as he struggles to find love and acceptance in this modern “coming of age” yarn.

It’s a gritty piece of local cinema that’s nowhere near the overdone “Hollywood” treatment of most crime flicks with big car chases or bullets rounds shot every few minutes. Its honest story and endearing characters (spot comedian Mike King as the pub heckler) hits the spot with audiences and that’s the beauty of the film. You almost sense watching The Last Saint that the cast and crew really pulled one out for Naufahu.

Koale is wonderfully expressive as the young teenager troubled by his mother’s drug addiction, he courageously seeks to make money peddling drugs to survive. Calvin Tuteao is ideal as the tough yet protective father, his line “Ponsonby’s gone to the dogs” cracked me up as I could just imagine the looks of those listening balking at the very suggestion. The cinematic skyline shots of Auckland make for a spectacular back drop giving the film an international flavour, even to the point of being unrecognisable (when did Auckland grow up?)

The Last Saint is a crazy ride into the Polynesian drug underbelly we know exists but don’t want to believe. It’s the Polynesian version of 70s cult film The Warriors, with our hero “The Last Saint” ambling through the Auckland night, encountering drug deals and crazy hawkers along the way. With an equally star studded local musical soundtrack you’d be best warned to keep Shazam on silent in the theatre. 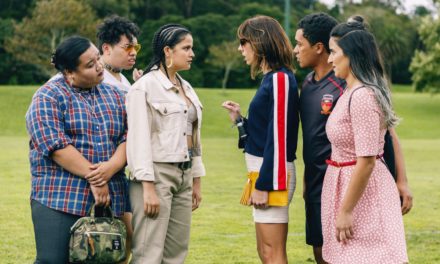