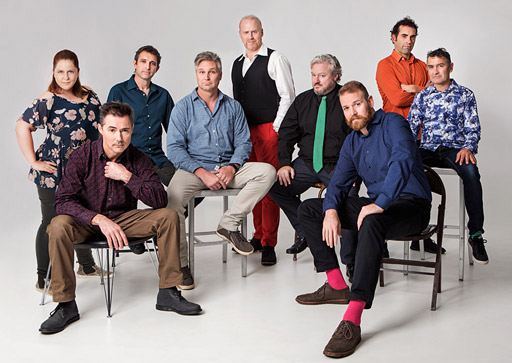 There is an art to improv – despite what the non-believers might tell you – it is a form of comedy that by no means is as simple as it looks. It requires lightening speed reaction times, quick wits and a little more than a dollop of twisted humour. Luckily The Improv Bandits are seasoned professionals, each armed with an abundance of the above skills and a few other little tricks besides.

Utilising the large blank space at Auckland’s Herald Theatre the troupe of six (Wade, Geoff, Mark, Tom, Paul and Amy) began the evening with some warm-up exercises; not for themselves mind you, but for the audience. A clever icebreaker for both performer and attendee it resulted in much laughter and a few eye-opening retorts.

Formed in 1997 The Improv Bandits are not only experienced but award winning, founding member Wade Jackson – who at one point had many of the audience members in literal tears as he ‘visually interpreted’ a particular scene – having himself been awarded a world championship title more than once. Members have come and gone over the years, some such as Geoff Simmons branching off to form troupes of their own in Wellington, but never turning down an opportunity to come out and play for their appreciative Auckland fans.

Requesting key words from the crowd has always been an integral component of improv, the more amusing and leftfield suggestions providing the Bandits both a challenge and material that can result in some of the most uniquely, original scenes that attendees could ever hope for; so don’t forget to think outside the box! But it’s not all just acting, both Mark and Paul bringing an additional musical element to the evening, that is as charming as it is face-achingly funny; familiar personality about stage and screen, Tom Kane’s physicality bringing a whole other dimension to a skit that involved both slow motion and stunt doubles.

For most of the show the six performers will utilise common improv tools, requesting a particular scenario from an audience member with a few additional details upon which to build a form of play that at times is so believable that you often forget that they had only just been given the facts a few moments ago. In otherwords, yes, The Improv Bandits are just that good. Word play, double entendres, mice with matches and fish phobias reigned supreme in a fun-filled hour that left you feeling delightfully elated. The brilliance being that you could return to every subsequent show and know that you would witness something completely different again.
The Improv Bandits are for anyone that wants to sit back relax and let the frivolities unfurl before them, safe in the knowledge that in the Improv Bandits hands humour will only bloom.