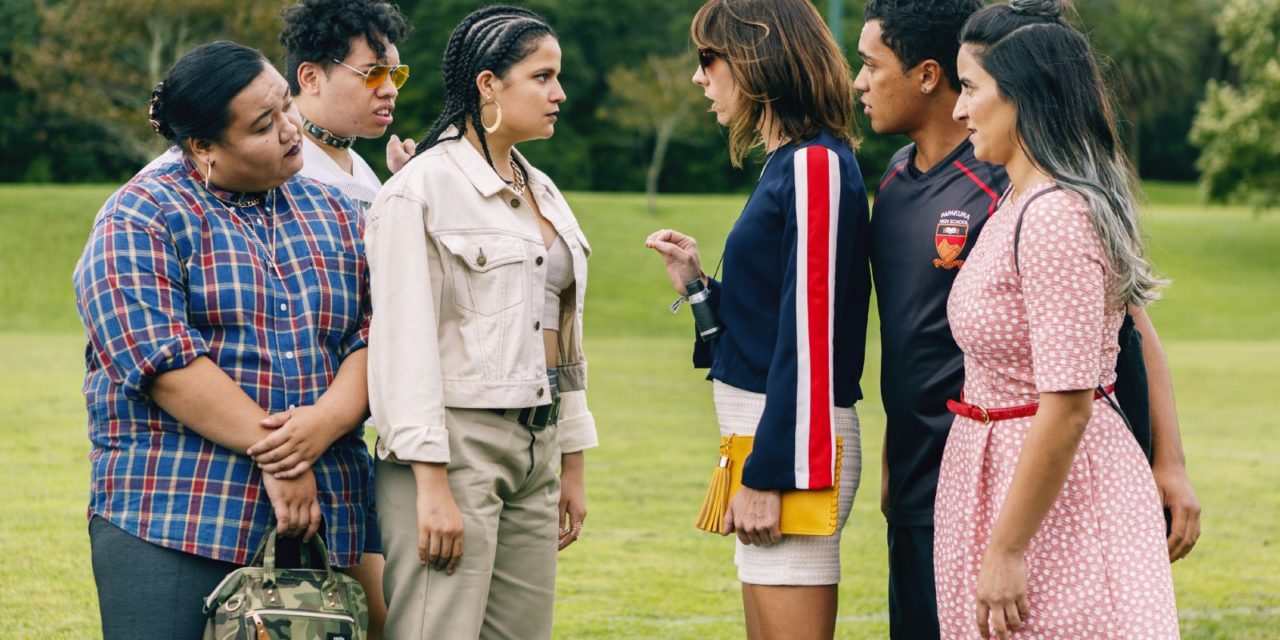 Kiwi movies always get hyped up before general release and this film is no exception. The film however is a good yarn that tugs on the heartstrings and tickles the funny bone with it’s Kiwi-as vernacular – successfully too. Showcasing at this years SXSW Festival in the States, it’s favourable reviews look to have some merit, with the Kiwi Comedy emulating the same interest here with New Zealand audiences.

Starring comedians Jackie Van Beek and Madeline Sami, who as teenage besties (including friendship bracelets & same boyfriend) now head-up a professional break-up relationship agency. They have a ‘break up’ plan for anybody willing to pay their agency for their exclusive services ranging from fake pregnancy’s to missing persons (dressed as police officers).

The storyline is better than your average, after the gags die off the storyline kind of determines the plot of a film. The Breaker Upperers keeps this mind as the characters unfold on the big screen, I actually felt the continued theme of the friendship between Van Beek & Sami succeeded in this respect, adding an elated contentment at the film’s end.

Both actors have a natural charm having no trouble finding laughs. It’s kind of the “What We Do” or “Flight of the Conchords” formula that sees Van Beek & Sami pulling the gags off seamlessly as they try to “uncouple” paying clients whilst on a personal journey to find their own “platonic” peace & happiness, which is actually easier said than done.

The comedy taps into the Kiwi talent agency banks enlisting some familiar recycled screen and comedic stars and even has Thor Ragnarok’s Taika Waititi on producing credit. Goodbye Pork Pie’s James Rolleston is perfect as Jordan the rugby jock, who enlists the services of The Breaker Upperers only to fall in love with one of them. Anyone who can pour a can of fizzy over themselves in slow motion to cool off is alright in my books.

Seasoned veteran Rima Te Wiata is hilarious as Van Beek’s screen Mum, her camped up ‘toffee-nosed’ send up, had me in stitches, while Thor’s Cohen Holloway is a crack up in 80s clothes as Jen’s (Van Beek) ex, as is Aussie TV star Celia Pacquola as the neurotic Annie nicely rounding off the mostly local cast. There’s a few other well known faces, who may have to be prepared to get a Hollywood call up if the film blows up overseas.

If you love Flight or Eagle Vs Shark you’ll go gaga for The Breaker Upperers, its tongue in cheek humour has a natural charm that keeps you locked into its storyline, Van Beek’s quick retorts and pig-headedness is genius while Sami is equally as fast in keeping up with the quips, her toned down portrayal of Mel (compared to her Super City TV show) is endearing, but ballsey. I loved Ana Scotney as Rolleston’s angry girlfriend Sepa.  Her level of ‘screen anger’ was next level, plus she played her role as the Hip Hop drama Queen to a tee.

Think of it as a funny X-rated Flight of the Conchords with a touch of Shorty St drama on the side and you come close to premise of this movie. I enjoyed this film and the bits after the credits, good to see a local movie grabbing the spotlight overseas, whether or not the Kiwi humour resonates overseas or beats Waititi’s Wilderpeople remains to be seen, however, I reckon its got a pretty good shot. Here’s to their next outing, sequel or spin off TV series. Out May 3rd in cinemas.