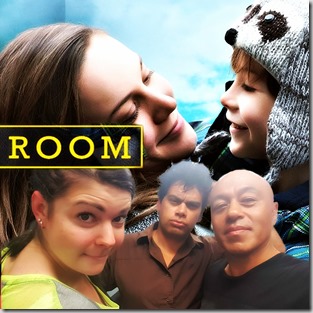 As the movie began I was reminded of a time when I was a young child playing at my mother’s feet. A time when I was either down with a cold or a tummy ache and forbidden to play outside with the rest of the kids from the street. In hindsight, a fond childhood memory of time spent with mother ,but at the time when you’re living it, a different story all together. Not just the part about being sick, but having to contain your restless, child sized appetite for physical play and socialising.  It’s something that could never be replaced with the makeshift or improvised toys you had to create from within the confines of mother’s ‘apron strings’. Of course the premise for the Room is more complicated than being contained as a prisoner in a small room. There are many more facets including slavery, serial rape, psychological torture to name but a few. But it was the theme of indefinite containment that seemed to be the most upsetting

​The ‘Room’ is an amazing portrayal of a woman and her child’s agonizing time spent incarcerated in a tiny room by a madman for more than five years. It’s a story which is based on a best selling novel which was in turn, based on real events. The two major roles are played by Brie Larson who has already won the Golden Globe ‘Best Actress in a lead role, and  Jacob Tremblay who won the BAFTA award for best young actor in a leading drama role. The two make up the lion’s share of the story and are quite simply perfect in the roles of mother and son

Though the pace of the film is slow, as you would expect being set in a single room for a major part of the story, it is never boring. It is gripping and compelling with some in depth themes which are carefully thought through. In addition, each of the supporting roles are played expertly by actors and actresses with lots of experience. A well made film that is worthy of it’s recognition at the Oscars this year