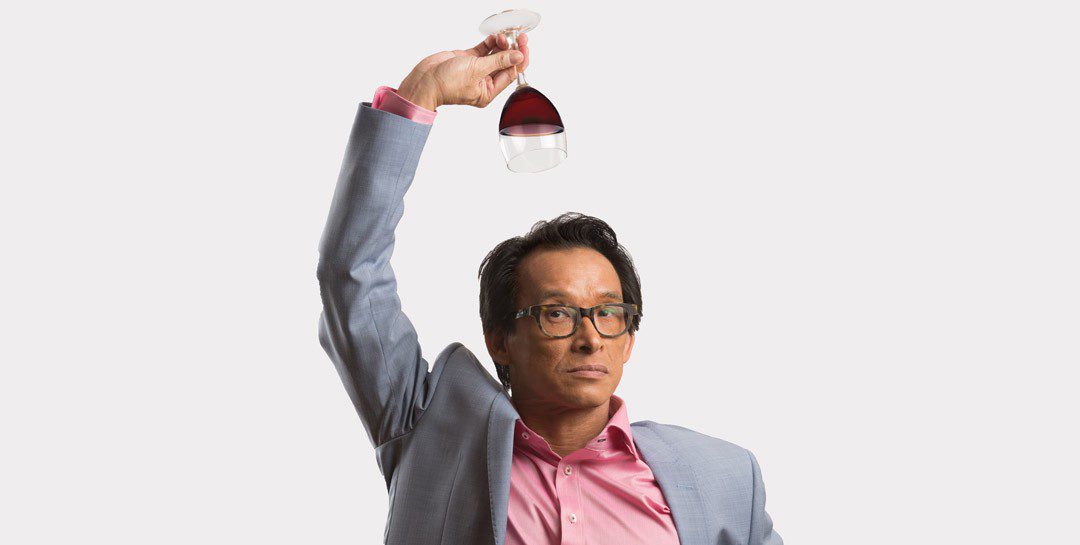 How the fuck do I write a comedy review? I’m not even consistently funny, let alone a comedian … let alone able to criticize the life efforts of a human being brave enough to stare the ultimate form of social rejection in the eye, by risking having a joke not laughed at! I’m just going to ignore the writer’s block, transcribe my thoughts on the gig and hope for the best #fuckitwe’lldoitlive!

My weekend’s misadventures kicked off with grabbing a double pass to Raybon Kan’s performance at Auckland’s NZ International Comedy Festival. I spilled my beer at the VIP section of the bar, where I was told I wasn’t supposed to be. I thanked my luck for the minimal witnesses to my lack of fine motor skills -“yeah nah, I’m sweet”- and quietly made my way down to the Vault at Q Theatre, empty plastic cup in one hand, embarrassed date in the other. I carefully picked seats in the second to last row, left of middle, where I estimated there’d be the lowest chance of being picked on by the comedian.

“Fuck what a weird name. I bet he’s going to talk about how his name is weird”. Raybon Kan introduced himself and his show ‘Positive Pessimist’ safely from the dark recesses of the wings in front of 50 odd people, and proceeded to jump up on stage and talk about his weird name. “Nailed it”.

I’m not sure if it’s always been this way, but I feel that the use of self-deprecation early in an introduction is a great way to get someone to like you these days. So when Raybon started by poking fun at himself (before pointing out the predominant silver-hairedness of his audience), I started developing warm fuzzy feelings for the man I had paid to make me laugh.

Raybon’s soothing voice and his humility made him an immediately likable and relatable comedian. His well thought out references to ‘Game of Thrones’ didn’t do much for me because I live under a rock with an internet connection, and don’t ‘Netflix and Chill’. But what I did relate to was his experience dealing with writer’s block: I’ve been staring back and forth between my notes from the gig and a screen for hours now. I don’t think I’ll agree to a Skype interview with a hypnotist to overcome it, but hey, good to know Raybon tried!

Throughout the show Raybon delved into matters as bleak as death and the subsequent awkwardness; thought provoking as moral relativism being a function of time; badass as Seal Team Six (I think they’re the guys that killed that Shazzam Hosseini guy or something? I don’t know); insightful as the seemingly broadening generational gap; relevant as feminism…

There were times when I felt he failed to connect one topic to the next, but the profoundness promoted a level of mental engagement that more than made up for the lack of seamlessness in transition. I liked that he built up the context so thoroughly, and then dropped an observation that made the audience at least chuckle, thinking “oh yeah… that’s pretty odd”, or split their sides if they weren’t too self-conscious about their laugh – there was a lady with a heavily nasal cackle and zero fucks.

I do still think the last 5 minutes of the hour long show were funnier than the rest, but perhaps the structure was intentional. There were several times when I found myself questioning whether the content was even scripted, and in my humble view, that would rate quite highly on the list of things a stand-up comedian would desire from his audience.

A Google search on the performer’s name (yeah… hadn’t heard the name before, because of lithospheric dwelling) confirmed my opinions on his intelligence, and a browse through some of his columns for the New Zealand Herald earned him a lot of respect from poor, irrelevant me. I’ll be keeping an eye and an ear out for this gentleman in the future. Mr. Kan, you’ve earned yourself a new fan!

PS: Comedy shows are a brilliant date idea -especially when you don’t engage in presumably lucrative activities involving Netflix- and mine was absolutely fantastic, thanks for asking. I had almost forgotten about the beer as well, until I saw the bartender mopping the floor by the VIP area on my way out, hating humanity with a smile on her face.