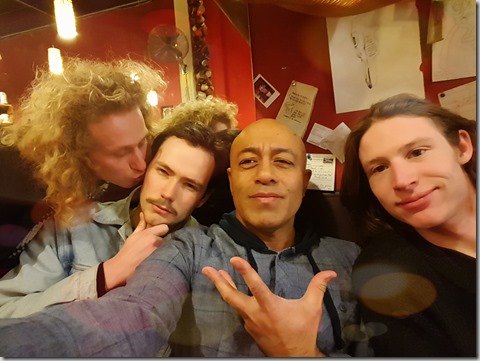 New Gum Sarn are relative newcomers to the local scene as vocalist Oscar Dowling & guitarist Durham Fenwick confide ‘they’ve been playing together for two years’, they’ve also been busy carving out a name for themselves with their animated live shows garnishing word of mouth around the country building anticipation for their just released debut record New Gold Mountain

In their familiar haunt Karangahape Road’s iconic Revel café, it’s a bohemian milieu that has inspiration written all over it. We wait upon bassist Dave Weir (He also plays guitar in The Nightshades with Durham) he slips in casually stating he’s at ‘band practise with his band The Nightshades’. “Where’s my allegiance? Just with music, definitely with music” he says earning the nod of approval of all at the table

2015 been a rollercoaster ride that has seen their debut album New Gold Mountain just dropped and are in the middle of their nationwide tour to coincide with its release. The Auckland four-piece, made up of Oscar Dowling, Durham Fenwick, Sophia Lawler-Dormer and Dave Weir, are all from Auckland – funny that considering Oscar is somewhat of a recent migrant to Auckland he recounts how he ‘grew up around Puhoi area in the countryside’, it’s a geographical reach that has attributed to their unique band name

“We were originally called Small Boys which was a bit of a take on our thin not very impressive stature as men” says Durham. “We were like ‘that’s kind of lame’ there’s a girl in the band as well, we’re not all boys ‘let’s change the name’. We were sitting in the food court one day and I was like ‘New Gum Sarn’ and Oscar was like ‘yeah that’s it, that’s a real good one’ and so we just decided to roll with that and finding out it that it means ‘New Gold Mountain’ which is what the Chinese called New Zealand when they came here for the gold rush– it kind of ties in nicely”

Their infectious pop singles ‘Money Talks’ and ‘Bad Soy’ are creating a bit of stir in the market, however Durham is quick to point out the relevance of its meaning which may come as a surprise to some. “Bad Soy just came out of growing up and being confused about everything h
13A Mariposa Place
Kamo

ow to spell words and feeling not so great sometimes. I felt like writing a song about it, I felt like it’s something a lot of people could connect with”

“Yeah it’s an album it’s a pretty short album but I’m kind of into that right now” says Oscar. “It’s kind of nice to be able to be able to listen comfortably to an album of like around half an hour kind of length, some people would go ‘that’s an EP’, nah it’s an album.. It’s a solid little recording yeah, we definitely want to record again real soon, all of us just want to tour that’s what we want to do”

“There’s so many so many good bands around” He continues. “It kind of amazes me sometimes just how much there is, I don’t know if it’s maybe a good time for it but it seems like there’s a lot going on now” 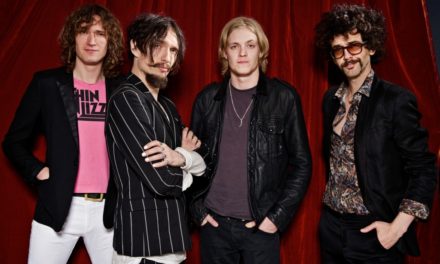