Here’s the thing about saying yes to something spur of the moment: do it, and it might just end up being one of the weirdest things you experience.

Which is a bit of understatement for the titular Monster Mash, a comedic dance show about a bunch of washed-up old school horror monsters who are possibly way past their used-by date. At the very least, the story is timely, what with the complete non-existence of Universal Studio’s apparent plans to create a “Dark Universe” with Tom Cruise. Lord that was not a great film. I digress.
Created and produced by Dynamotion, Auckland’s premier comedic dance troupe, the story starts at the funeral of The Blob, who has unfortunately passed away due to diabetes-related complications. A touching eulogy from his monster friends and wife The Mummy ensue, before immediately facing a series of events which has each monster questioning their validity and sense of self-worth.

Okay, that last part is a bit paraphrasing, but you get my gist. Not to put too somber a view point on it, it’s actually an intensely funny show, featuring some excellent dance choreography from creators and producers Thomas Sainsbury (Creature from the Black Lagoon) and Lara Liew (The Mummy).
The cast is exceptional in all of the dance numbers, but pay special mind to Frankenstein’s Monster (Harry McNaughton) and his Bride (Kate Simmonds), whose body movements are especially comical, as is their rapport. Funnily, rebellious Teen Wolf (Zak Enyat) going through stereotypical teenage angst moments wanting to forage his own paths was particularly comedic. Also fantastic was Roberto Nascimento’s Dracula, and his fetish of exquisite silk capes.

Understandably, the dialogue-drive ‘interludes’ between dance numbers try to drive a narrative that falls a little flat, and never quite reaches any sense of emotional satisfaction. The ending, which culminates in an attempt to be truly ‘scary’, also doesn’t quite reach what it may be intending. However, the lack of clarity in the Monsters’ fates is welcome, as I do appreciate things not wrapped in a pretty little bow.
And one rather unfortunate side of choosing classic-era Monsters as your storyline is those who aren’t as in touch with golden era horror will probably miss the majority of pop culture references embedded throughout the show. It does require a certain amount of pre-knowledge to pick up on all the easter eggs, but rest assured, it won’t detract too much from the overall experience.

Monster Mash is a great way to wind down after a long work day, and you just need something silly and enjoyable. But treat it like your standard popcorn flick and don’t go in with too many grand expectations. They’ll be at Loft at Q all week. 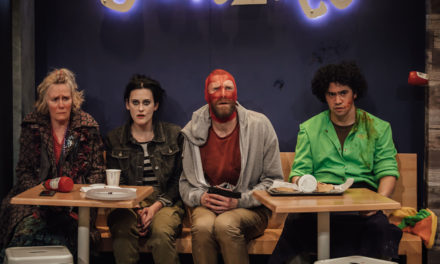