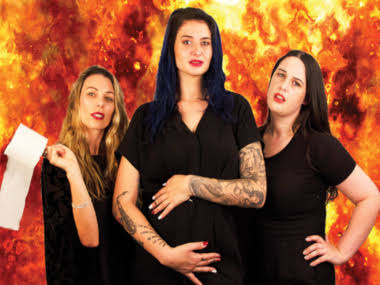 What happens when you exchange the academic disseminations of Jordan Peterson for a trio of sassy sisters, who deliver their stuff confidently on the comedic stage? You get one of the best platforms to investigate the sometimes controversial topic of feminism; bring in Role Models.

This debut raw comedy from Bec Sandys, Brooke West & Audrey Porne, harnesses the f word as its essence (as well as continuity to bind the three acts), & challenges its parameters by sharing many of their own colourful & broad life experiences. Each of them has their own unique style also…
West, who is currently well into a pregnancy, presents an honest take on her plight; “don’t judge & just bring the tequilas to the hospital; anyone who goes through the ordeal of childbirth deserves a drink.” The c word flows freely & naturally with this one.

Porne, has a lens that looks leftfield at her numerous personal encounters. Of herself; “I’m a Scorpio; which translates into scary slut”, & when out on a rare date; “he opened the door for him, not me. I’m a feminist so I loved it.”
Sandys appears & delivers with a twist of cocky Ocker; “Gidday ballbags.” She makes light of some considerable family/personal battles; “I remember the 1st time I got fucked up, when I was 2. Parents really shouldn’t leave those bottles all over the place.”

In much the same way that Destiny Church comes under scrutiny for its exclusive entry policy, Role Models exposes a few cracks in the feminist movement to both challenge & humour its audience. The sisterhood should include all sisters, right? & that aspect of diversity is what Role Models has at its heart, filling those gaps of otherness.

Role Models runs til Saturday eve (May 11th), at the cozy setting of the Cellar (drop down at the back of Q Theatre). Its later slot (10pm), & taboo breaking programme make for perfect timing if you want to unravel heading up to & into the weekend.