I will begin with an admission of honesty. I am not a big fan of musicals. Something about all that joyous singing and dancing just kinda makes me flinch a little. In saying that however I have been wanting to catch Austen Found for quite some time, clashes in availability never seeming to go my way. But last night, the stars aligned, decrees were writ, and Austen Found and I were finally in the same room at the same time, which is very helpful when attempting to review a show to say the least.

For those unfamiliar with Austen Found, it celebrated its tenth anniversary last year; yes, that’s right it has been around for over a decade and has built up – deservedly so – a reputation for being quite the riotous evening out, hence tickets are always snapped up rather quickly. Created by the Auckland based improvised comedy specialists ConArtists (who by the way first established themselves in 1987 so they are very good at what they do) Austen Found is basically an improvised ‘Austen style’ musical comedy, each individual performances title gleaned from audience responses and the involvement of the very important “militia hat of excitement” which tonight contained the seven deadly sins.

But before we were whisked away into this musical world of laughter, our host for the evening gave a great quick verbal presentation about the real Jane Austen herself. For example, even I was unaware that Austen was engaged for exactly one evening, declining her suitors offer the following day! While it is not necessary to know anything about the famous author before attending the show, I personally thought that this was a nice touch and demonstrated the players understanding and interest in the person upon which they had based their production around.
So, we had our main character by the name of Catherine Wally-Bottom and the name of the musical, which tonight was ‘Envy & Elegance’ a wonderful combination of two words. I prepared myself for what was sure to be an excellent hour of entertainment.

“Austen Found was more than well worth the wait to see. It even won over this musical-phobic comedy fan.”

What I did not prepare myself for was just how outstanding the production would be. In all honesty I am still in some disbelief that the several players on stage improvised such brilliance on the spot. Yes, obviously there would be residual themes, character voices and word play from previous years that have collected in the bottom of the annually growing melting pot but watching the players you can also see that they are constantly reading the situation, before taking it to the next level of dialogue or song.
The players who are in period costume often use smaller accessories such as hats or scarves to ‘change character’ with humorous results.

Tonight’s play featuring topics ranging from muskets and a male’s pride in its size (oh yes, the innuendo does run thick and fast in parts), talks of marriage, amusing hymns and a badger, amongst many, many other hilarious moments.
The musical pieces (accompanied by simple piano work) are brilliant, the laughter rising from the audience often non-stop. Like any improvisation, there are some sections that work better than others, but overall Austen Found was more than well worth the wait to see.
It even won over this musical-phobic comedy fan. 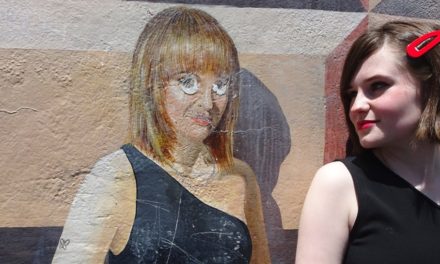