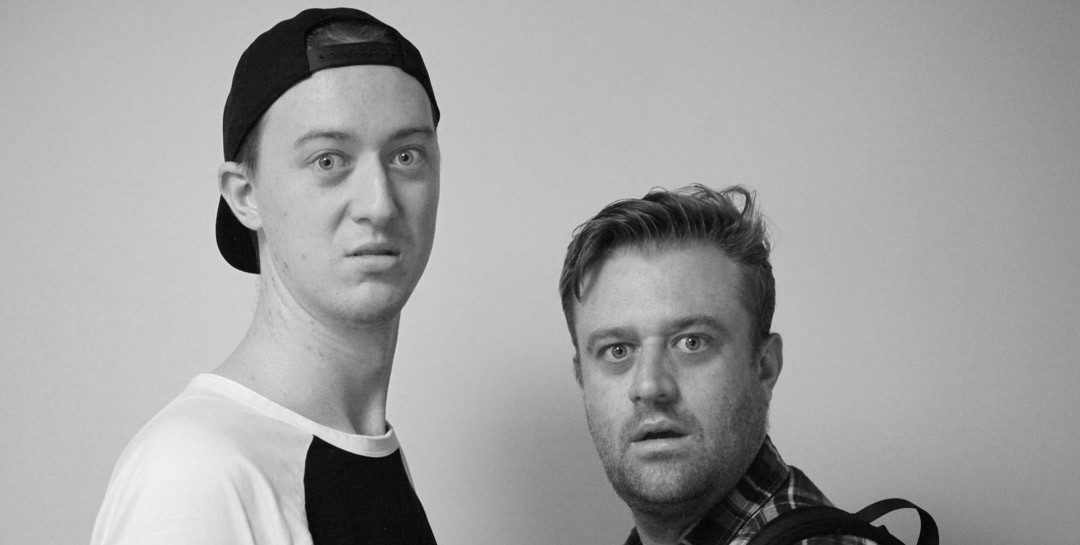 One of my favourite parts of the New Zealand International Comedy Festival is taking a punt on comedians I hadn’t heard of, usually for a very reasonable price tag that ends up being well and truly justified by the laughs.

Venturing down to The Vault at Auckland’s Q Theatre to see ‘Unaccompanied Adults’ by Aiken Hutcheson & Graeme Clarke definitely ticks that box.

As I descended into the humid depths of The Vault, lamenting the distance between my seat to the bar, I realised I didn’t know much about either comedians. Aiken Hutcheson or Graeme Clarke.

A quick google of Wellington comedian Aiken Hutcheson would have revealed that this was Aiken’s first festival gig, but you wouldn’t have know it if it wasn’t for the disclaimer. That and he’s really tall, 6ft 7 tall.

I’d actually checked out the other ‘Unaccompanied Adult’, Canadian comedian Graeme Clarke at Revelry Bars ‘Fresh Comedy Night‘ hosted by Brendhan Lovegrove. His set – which saw him filling in for another comedian at the last minute, may have been delivered half-cut, but was also consistently amusing. I was keen to hear a his full set and was in no way surprised to find out that Greame was selected one of 11 finalists in the 2015 RAW Comedy Quest in 2015 after only months after doing stand up.

As The Vault started filling up there was little time to reconsider fetching one more beer as our MC for the evening bounded onto stage and successfully warmed up the crowd with a series of effective gags that proved to be a fitting taster for what was to come – sometimes awkward, often sexual, but consistently laugh-worthy.

The first of the Unaccompanied Adults’ introduced was Aiken Hutcheson. At 6ft 7 Aiken Hutcheson is hard to miss. While Aiken resembles somewhat of a comically stretched Stephen Fry, his style – a mix of storytelling, offbeat observations, and punchy one-liners compares favourably to the likes of Russel Howard.

Aiken spent his set seamlessly moving between one-liners and personal anecdotes, punctuated with occasional loud exasperations about living from such great heights. He had an awkward though laid-back delivery that kept the audience in stitches. A consistently funny set from a comedian beginning to blaze his own trail in the New Zealand comedy scene.

Following a brief interlude from our MC, Graeme Clarke was introduced to the stage to a now fairly raucous audience.

It didn’t take long for Clarke to put his stamp on the night, commanding the stage with ease as he as he delivered a series of jokes that were quick to the punch and lapped up by the audience. Greame Clarke is a pro. Throughout the night he kept the punters on their toes, taking an unexpected turns with his material that touched on everything from how being Canadian give Clarke license to give Americans a bad name after being mistaken for one, to the ups and downs in his personal life.

I was impressed with his ability to consistently deliver with lines you felt you really shouldn’t laugh at but that were just too funny not to.

Graeme Clarke is a comedian with an impressive set of weapons in his comedy arsenal. From great accents and smooth segues, to his Jim Carrey-like facial expressions and blunt yet hilarious punchlines, Clarke’s comedy was so good I hadn’t realised his time was up by the time he rattled off another great punchline.

Before leaving the stage he took the chance to thank all those involved and provide one last story for us about getting into stand-up which was a rare and genuine moment well appreciated by everyone.

I headed back up the stairs more than satisfied by the hour’s comedy from both comedians. ‘Unaccompanied Adults’ is a show full of awkwardly hilarious jokes and I’d happily see either comedian again – I can tell I’ll be replaying the highlights over the next few days with a chuckle, which for me is what the Comedy Festival is all about.